Being inexperienced in desert driving wasn’t something I recognised in myself… After my very first short drive into the desert, I became characteristically confident in my own abilities. I imagine this is something most men will relate to, after doing something once and it not going spectacularly wrong it’s pretty normal that I would classify myself to be an expert.

Buy a house once = Estate agents know nothing about property.

Go on holiday to Italy once = Antonio Carluccio knows nothing about pasta.

Drive into the desert once without getting stuck/ dying = Gods gift to dune driving.

You know the form.

So after a single successful trip I was excited about my next, and was already thinking of ways to improve on my inaugural experience. It wasn’t long before chance fell into my lap and an opportunity arose that I wasn’t to forget.

I met a very charming lawyer at a children’s party, he had arrived driving what could only be described as a monster truck. I had never seen anything like it. Being new to the Middle East, and coming straight from the UK meant I couldn’t believe a vehicle like the Ford F150 Raptor could exist.  This thing is VAST.

Through an odd chain of events, mainly based around his over generosity, he agreed to lend me his Pride and Joy for a weekend to explore the desert…what could possibly go wrong…

My parents were staying in Doha for the first time shortly afterwards, I wanted nothing more than to show them how amazingly beautiful and fun the dunes could be. So when I arrived at the house driving a Monster truck everyone knew we were in for an awesome day. It couldn’t have gone smoother, a truly epic day, three vehicle convoy out to the inland sea in time to set up a BBQ in an incredible spot overlooking Saudi in total isolation. We enjoyed Fillet of Beef on the BBQ, swimming and enjoying the majesty of the desert. All sounds a bit perfect? Well obviously it had to go wrong.

Inexperience can rear it’s ugly head in many different ways, that day it first crept up on me when I suggested we watch the sunset over the dunes. What a treat for my parents! What a bloody disaster, holy crap it gets dark fast. I mean properly properly dark, like a switch – Black.

Which led neatly to the highlight of the trip – Whilst waiting in the saddle of some dunes for Lexi to remove her Pajero from a particularly soft patch out of nowhere at 100kmh came a Land Cruiser over the top of the dune next to me. Crashes happen very slowly even when they are fast, I can’t tell you how slow they are when they are actually slow. The driver of course slammed on his brakes and by the time he came down the dune, skittering over the sand and walloped into the side of my friends vehicle my 75 year old father, 4 year old son and I had all had time to say rude words quite loudly, I had even had time to turn around and scold Archie for swearing and we still hadn’t actually been hit.

5kmh is still enough to make a sizeable dent in the side of a monster truck. A dent in someone else’s pride and joy was enough to heavily dent my confidence, and make me realise the desert isn’t somewhere to be heading as a novice.

An incredibly valuable lesson, that I made sure I remedied before our next adventure. 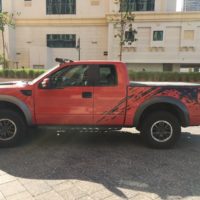