It was alway going to be an ambitious plan, but after many weeks of discussion finally we set off on our quest to reach the border with Saudi Arabia. The aim of our weekend was simple, try and camp as close to the border as we could possibly get too.

The desert had become a comfortable environment after an exciting round of trips into the dunes in the previous months. As the season neared its close with temperatures rising, we decided to set out on one last camping trip and try reach new areas and explore untouched dunes.

Google maps was to be the main area of research, careful scanning of the satellite imagery meant a rough route was planned skirting the inland sea and aiming for a point just north of the border with Saudi Arabia. (It’s worth mentioning that Qatar is currently undergoing a blockade from its only neighbour it shares a border with.) We knew that getting close the border would almost certainly face some challenges, but that is what adventure is all about! With all of our children and wives on half term in the UK the four of us in four 4×4’s set off after work one Thursday in our quest to be the first people we knew to camp on the border.

It was the first time any of us had left Doha immediately after work and headed into the desert as the sun was dipping. It in itself bought a whole new experience to desert driving, a beautiful deep red sunset started to fill the skies around us as we got further into the dunes and pushed our vehicles into 4 low. But it wasn’t long before the dunes finished and new landscape became our challenge.

A mars like surface of sharp rocks and crags made progress slow, until eventually we started to cross the soft salt flats of a long dried up sea bed. We picked our way cautiously towards the ever rising dunes on the horizon in the hope of finding both soft sand to end the punishment on our vehicles and some more entertaining driving conditions.

As darkness fell one of our group took a small short cut across a salt flat and sunk hard to his belly. His relentless Pajero had been stopped dead in its tracks and looked to be beached hard. We knew time was against us as darkness fell so settled into the comfortable routine of a speedy recovery. Spades and shovels did the lions share of work before we connected two snatch straps together and plucked the Pajero from the sticky salty sand.

The darkness in the desert falls upon you with alarming speed, none of us had extra light bars on our vehicles, and none of us wanted to be caught in full darkness trying to find a camp, but with a decent recovery to deal with that choice was snatched (nice pun!) away from us. 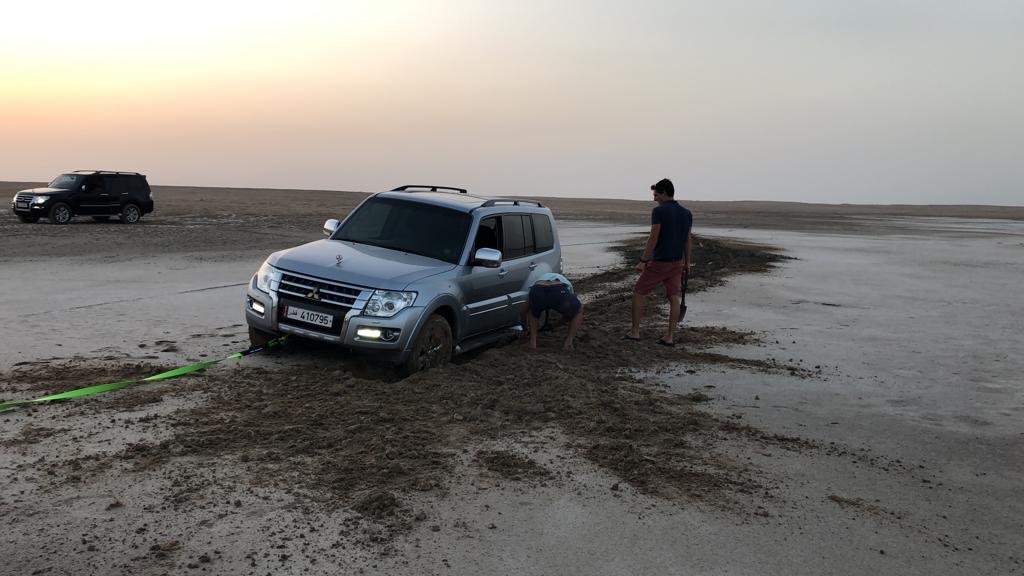 We decided to find the best bit of flat ground we could amongst the rocky outcrops and make camp for the night, we know we were only about 2 miles from the border and knew we could break into the sand dunes the following day. From the gloom ahead of us a sign post came into view, which seemed to be something of a mystery so far from a road or settlement, something in arabic, perhaps the pictures of guns, and was that a jail?

We ignored the sign and found a suitable depression in the rock to give us shelter from the wind and pitched our camp. A glorious fire and delicous dinner ensued, nothing really beats four good mates in the middle of nowhere, enjoying excellent food and wine with nothing except adventure ahead of them. 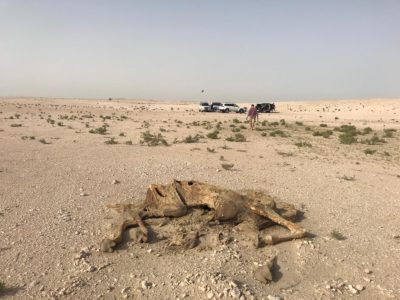 The morning broke after a great nights sleep under the stars, the smell of cooked breakfast soon had all of us on our feet and looking for the next challenge. None of us assumed the challenge would become trying to avoid the smell of a dead camel! In our rush to find camp we had not scoped the area around us well, and as such had failed to notice in the dusky light a petrified camel metres from our camp. One of our party took to the camel more than the others, but that is another story…

After discovering the camel and packing up camp we were high spirited as we pointed our bonnets south at the border, only to immediately spot a major obstacle. 2 miles North of the border, or 250 yards from our camp as it turned out, there is a 12 foot high chain link fence blocking any access to the border. Sadly the sign from the previous night suddenly made sense, we realised our adventure had suddenly come to an abrupt end.

Knowing when to give up is key when you are out of your comfort zone, the combination of messing about on the limit of the border and being a very long way from paved roads meant turning around was our only option.

High tailing around the edge of Inland Sea heading for the soft and welcoming dunes was an awesome end to our little adventure. 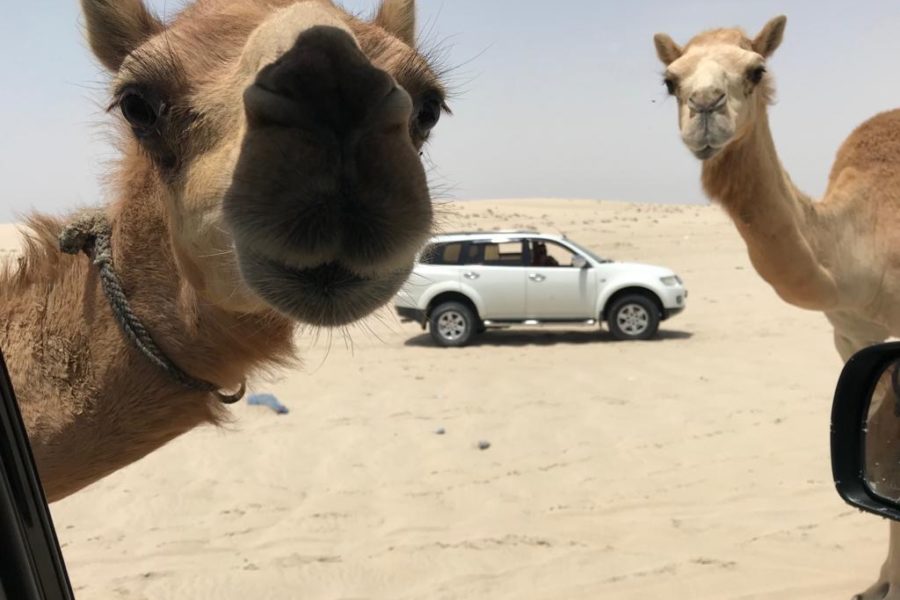 Camping at the Qatar/Saudi Border