Ventura is loaded, fuelled and ready to take on the huge task ahead. I am nervous, excited and just hoping I can make the Pyrenees before the weekend. It seems such a long way away right now, but all fingers crossed for n incident free journey through fence over the next couple of days.

Battle of the Somme Aire – 328km – 2.5 hours (5.5 hours)
1am – An awful place to stop for a Kip, right in the middle of The Somme in an abandoned car park, not sure what was more terrifying being raped by trucker or a thousand world war 1 soldier ghosts surrounding me all night. Zero sleep. 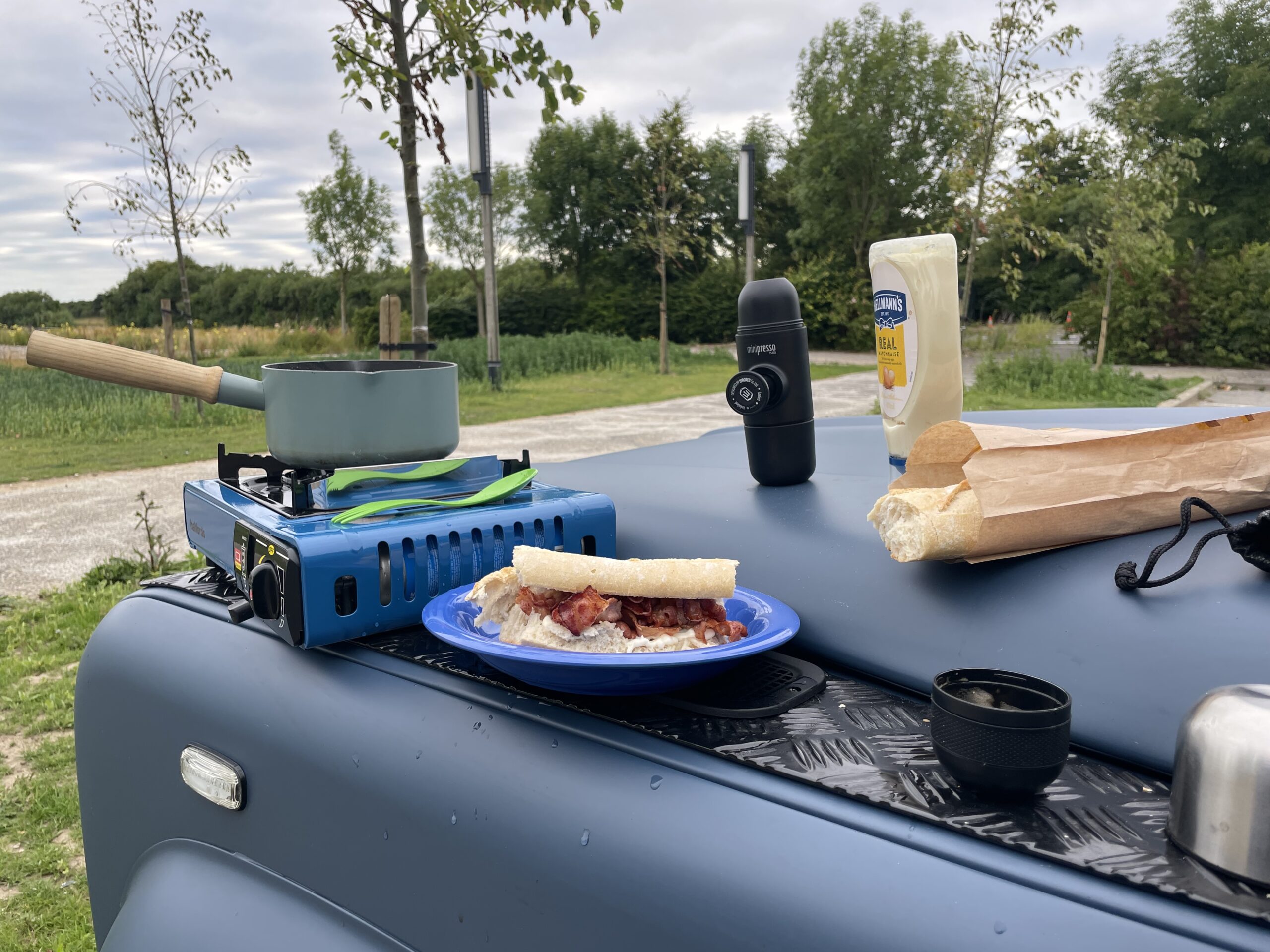 From last nights Aire through Le Mans a massive push down to Bordeaux.
France is massive and quite dull, so long as Ventura keeps going I wanted to just thrash it out.
Nothing to report aside from leaving my wallet at a picnic spot, which is chilled. 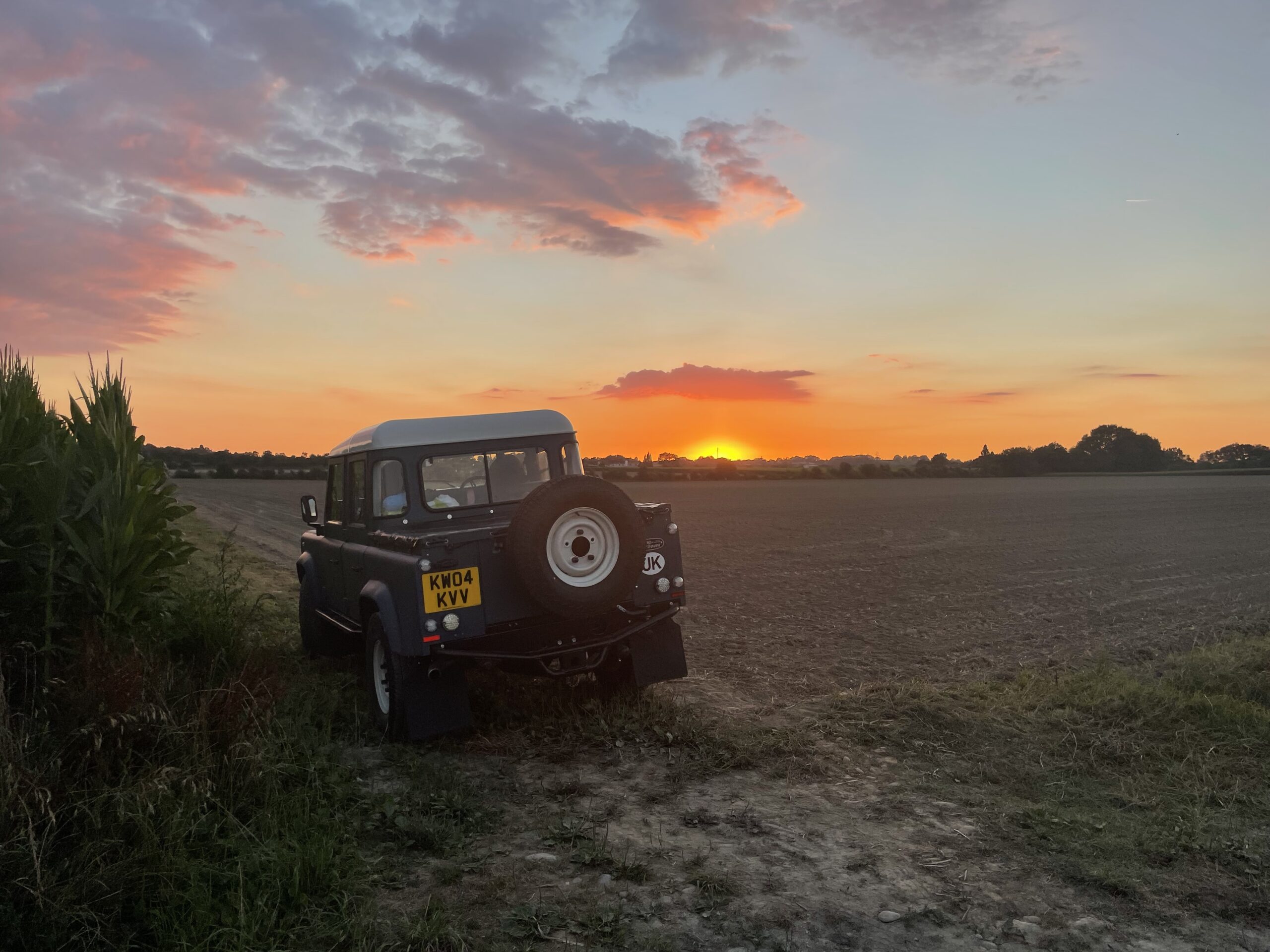 Today was all about the mountains. I made it ti the Pyrenees a day faster than I thought, so I used it to explore the amazing scenery.

Starting from Lourdes I simply pointed Ventura up tracks until they ran out. I have no idea if it’s allowed but we spent hours off the tarmac.

In the afternoon i found my self at the end of the road and thought it might be a nice hike to a lake nearby. It turns out I can’t read a map, and the scale was way off for me…what i thought was 1/2 hours was a 5 hour slog. But an amazing wild swim at the top (not that real top) awaited me.

I spent the late afternoon driving over the Col de Tourmalet, the first of our mountain passes. 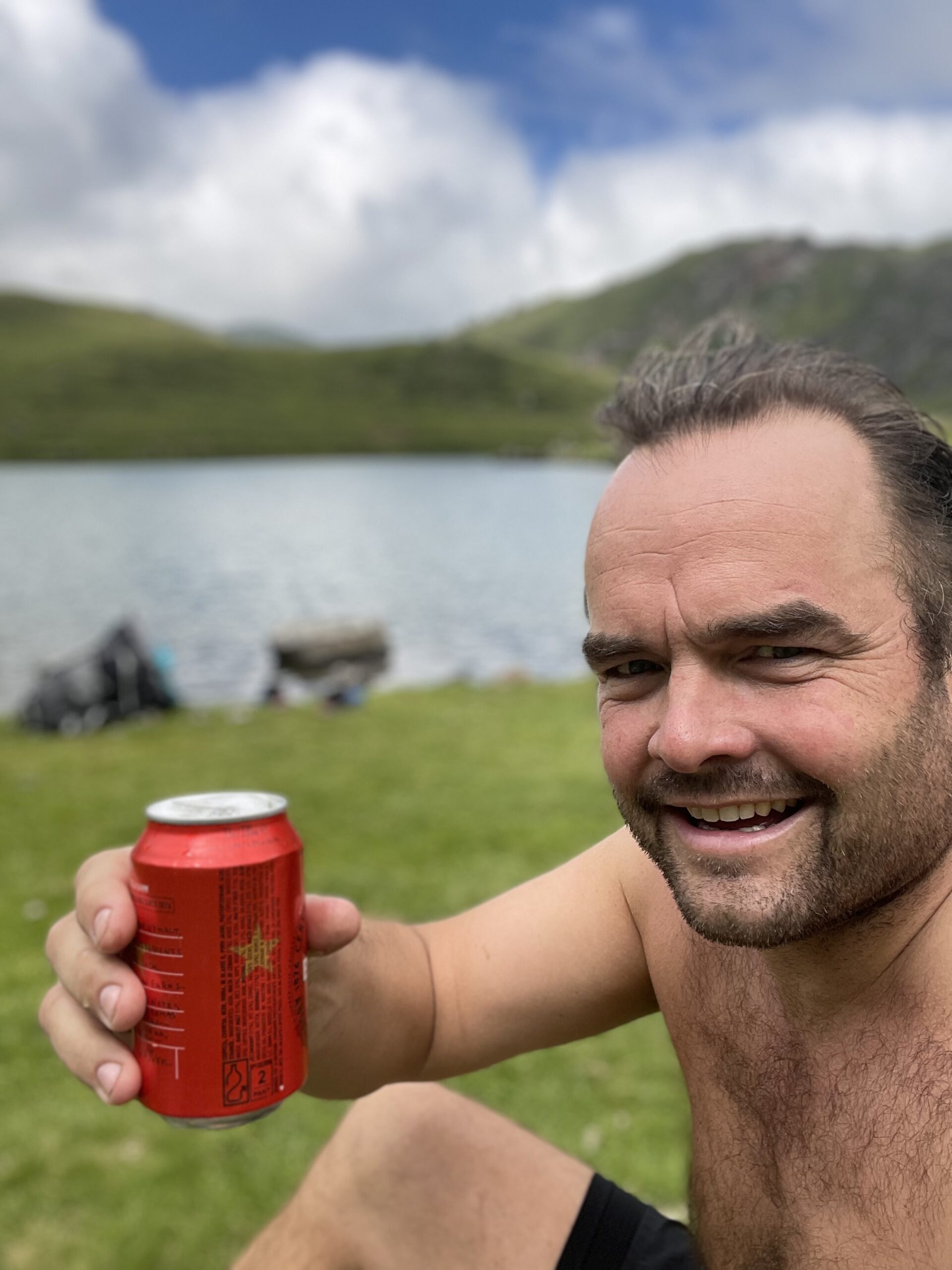 After a sharp breakfast I decided to start trying to pick off a few more “Col’s”. having decided to camp in a proper camp site for the first time since Robby Love’s camp site outside Rock many moons ago, I’m not sure I’ll be rushing back…

The morning was spent on and off road taking in some of the most breathtaking mountain roads and tracks I have ever been on. I spent a great deal of time in Low ratio (proper 4low’ing) and at many points needed a locked diff to scamper up the insanely steep rocky paths. I turned back at one point as it simply got too steep and scary, and I was alone so decided not to get in trouble. Everywhere I went Marmotts dotted the landscape, something I have never seen in real life, only ever stuffed and look a little surprised in a corner of a restaurant or shop in the Alps.

After a series of off-road tracks, we picked off Col de Tentes, which has a disappointing car park with a blocked access down to Spain rather than a proper mountain pass. So I turned to Col du Soulor, which has the most insane tiny road running out the back without fences and precious little regard for safety simply hanging onto the edge of the mountain and weaving for miles round to Col de Aubisque. All as stunning and mind blowing as each other, views like nothing I have ever seen. A totally epic drive.

The road then pushes you back down to the valley floor for one last climb out through Col de Pourtalet where I then stopped for a late lunch before pushing out of the Pyrenees and into Northern Spain.

I had heard that there is a desert region called “La Bardenas Reales” and it seemed almost on the way, so I swung off the highway and diverted for about 100km to check out a European Desert. Perhaps I am a bit fussy, but deserts aren’t supposed to sustain life, and this one has fields…so I wasn’t instantly impressed. But as I picked our way further into this national park through the blazing 40 degree heat I can accept some desert like features. I’ve been there now, so trust me, you don’t have to.

I got to admit to being some what surprised to have made it this far, as a result I have no idea what tomorrow brings. An early start and head for Portugal to see what I can find. 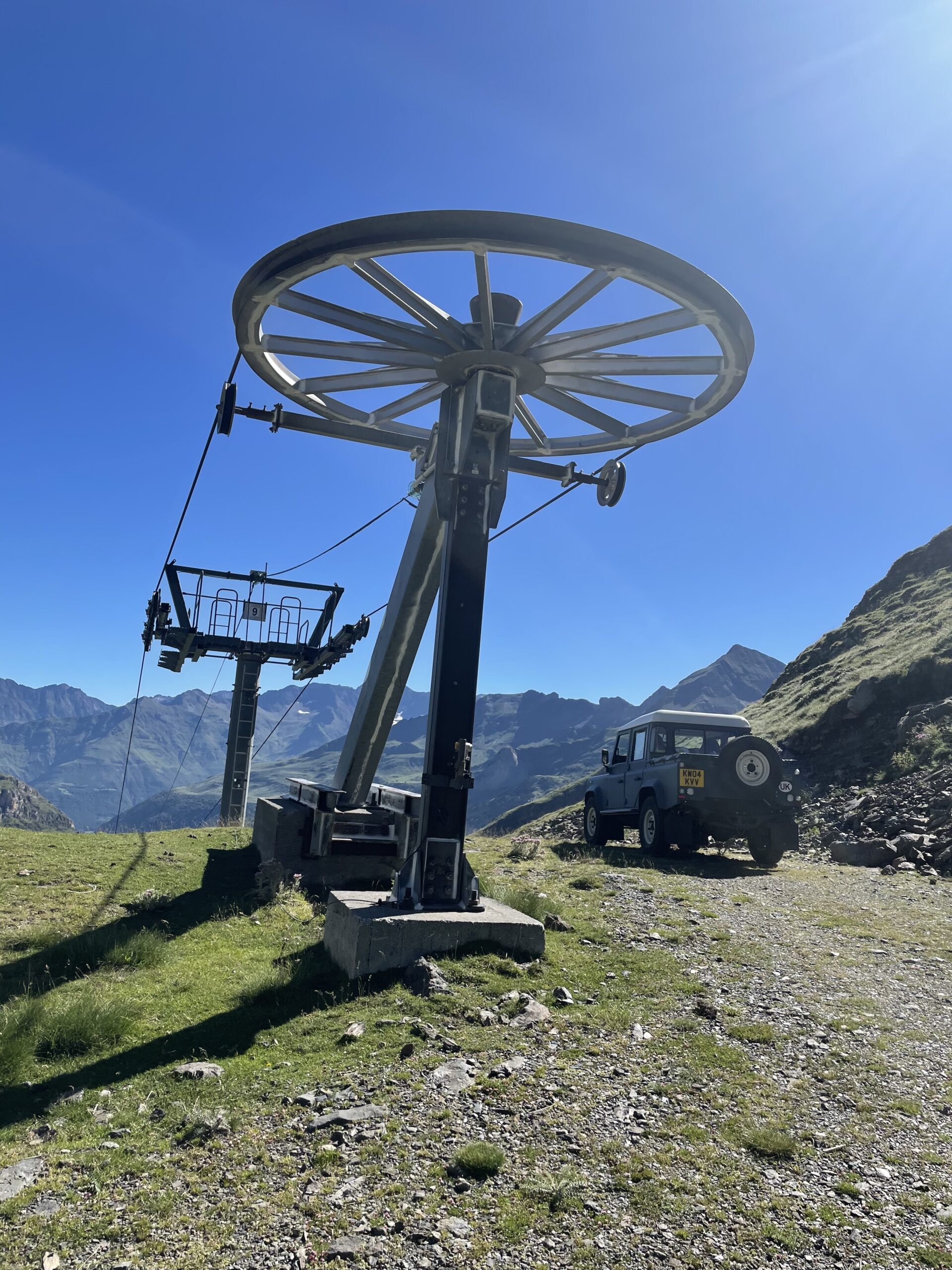 Why do the European’s champion 2 star hotels, they celebrate their lack of washing facilities and awful food with giant signposts on the side of their buildings. ‘Come and stay with us,’ they scream as you hammer down the motorways of Europe, ‘come and stay and catch Ebola from the bar of soap we have discarded near your dribbling bath tub’ Its remarkable how effective it is, and as a marketing strategies go, celebrating your failures is an off tactic but it worked on me. It was as a result of this that I found myself waking up at 5am desperate to get back on the road and get out of the hideous surroundings I found myself. I actually longed for a camp site, and my own tent!

So a last 600 mile push is all that stood in front of me and finishing this epic, the heat of the previous day had been draining and I knew the road ahead was going to become equally dull when the sun got up to its hull height and the cab of Ventura began to push past 40 degrees. For the first time I set a direct route to Lisbon and got moving, but then remembered there is a mountain range (Sierra de Estrela) that is not far from the route into Lisbon, so just before lunch I turned up into the Sierra De Estrella for one last climb.

I don’t know much about Portugal so was somewhat surprised and amazed when I found a small ski resort at the Torre (The highest point in all of Mainland Portugal) It didn’t look like it had the greatest selection of runs, but I look forward to coming back up here in winter to gives its slopes a run! After a quick lunch on the summit my journey seeking of high mountain passes between London and Lisbon came to an end, it was a simple 4 hours down the mountain and into Lisbon taking my final day to a sweaty 12 hours of driving.

If pushed about my favorite part of the whole 1,800 miles it would likely be the Pyrenees and its epic endless views, but secretly I know that all of the views were made better by having that amazing little truck in them. I can’t believe Ventura made the whole journey without so much a single bolt falling off, but it did and now I can’t wait to put her through some more brutal testing. The deserts of Morocco? Coast to Coast across the Pyrenees off-road? Namibia? Who knows… 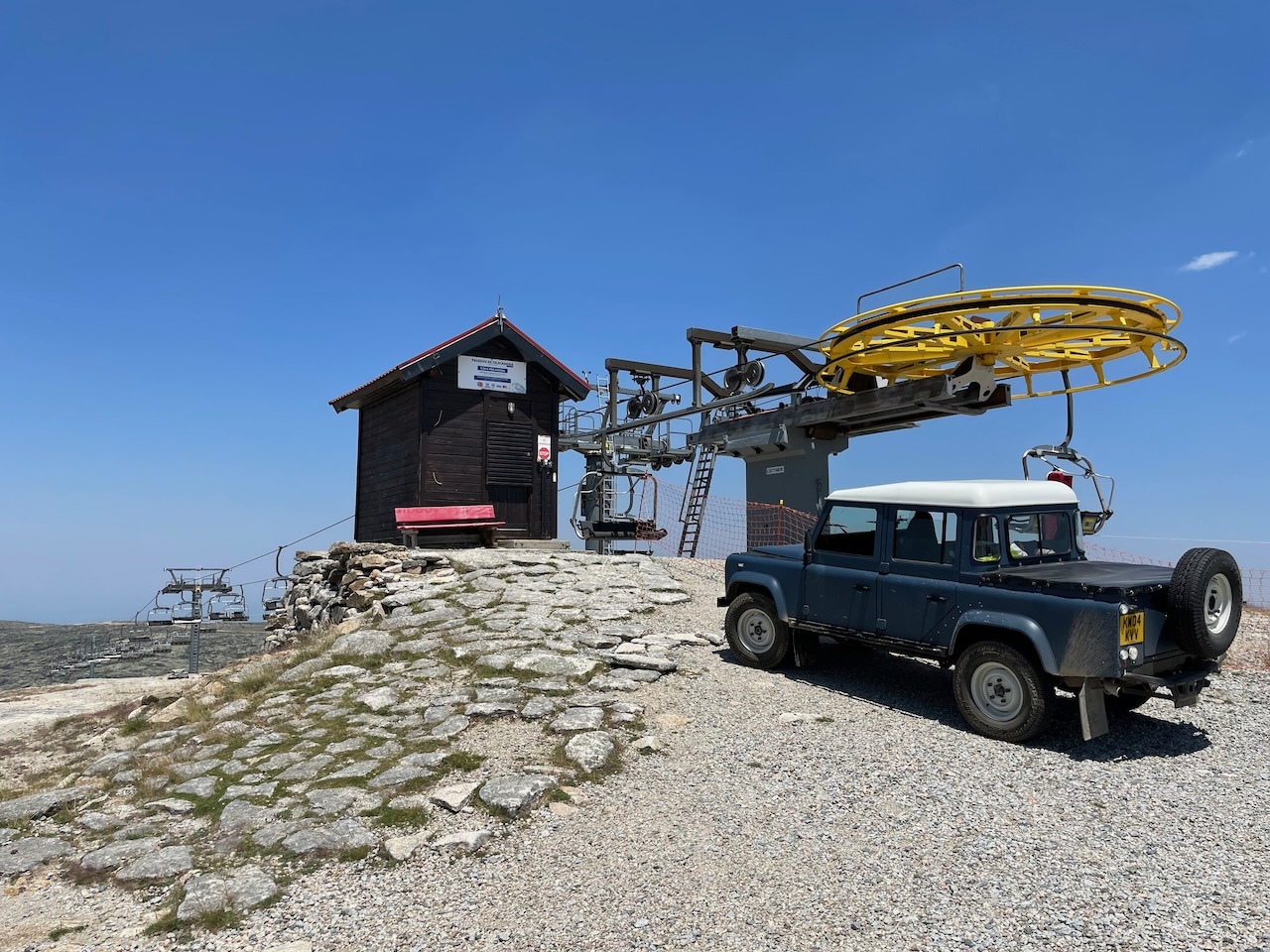